Combined Insurance provided a hot meal to more than 700 military members and their families on Thursday, April 25th 2019 as part of the USO of Illinois Great Lakes Center’s No-Dough Dinner initiative.

A leading provider of supplemental accident & health, disability, and life insurance products, and a Chubb Company, Combined Insurance has a long history of giving back to the military community. The company was recently named the #1 Military Friendly Company for 2019 by VIQTORY/G.I. Jobs Magazine, marking the company’s eighth consecutive year in the top 10 list and fifth consecutive year in the Top 5.

“We are honored to have this opportunity to show our appreciation to our country’s service men and women,” said Bob Wiedower, Vice President of Sales Development and Military Programs. “Our partnership with the USO and other Veteran and military-serving organizations exemplifies our mission of giving back to the communities in which we live and work every single day.”

A group of more than a dozen employee volunteers came together to serve those in attendance at the USO Great Lakes Center. USO No-Dough Dinners are normally served the evening before a military pay day, when funds for service members and their families may be running low and the opportunity for a hearty meal is most welcomed. The No-Dough Dinners are funded by companies, clubs, or other organizations who then provide the volunteers to serve the food on site.

Many of the military service men and women that utilize the USO Great Lakes Center and come to the No-Dough Dinners are Junior Sailors attending military specialty schools at Naval Station Great Lakes; however, all branches of military service are welcome—including Army, Marines, Air Force and Coast Guard. 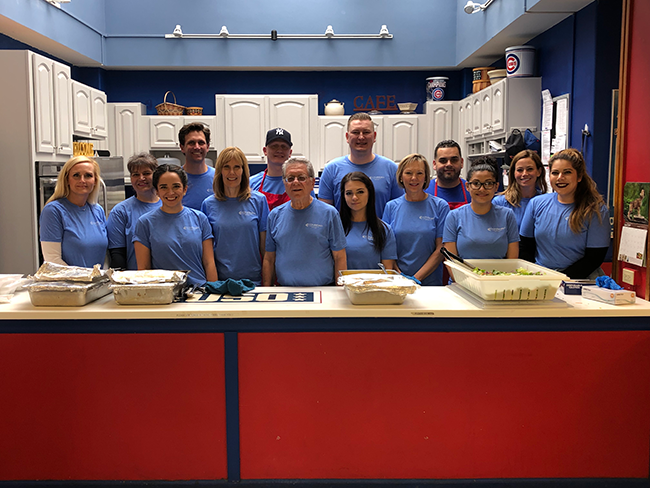 About Chubb
Chubb is the world's largest publicly traded property and casualty insurance company. With operations in 54 countries, Chubb provides commercial and personal property and casualty insurance, personal accident and supplemental health insurance, reinsurance and life insurance to a diverse group of clients.  As an underwriting company, we assess, assume and manage risk with insight and discipline.  We service and pay our claims fairly and promptly.  The company is also defined by its extensive product and service offerings, broad distribution capabilities, exceptional financial strength and local operations globally.  Parent company Chubb Limited is listed on the New York Stock Exchange (NYSE: CB) and is a component of the S&P 500 index.  Chubb maintains executive offices in Zurich, New York, London and other locations, and employs approximately 31,000 people worldwide. Additional information can be found at: chubb.com.